I began Termination of FGM, a project of Loreto Sisters, in 1998. Since then, I have written four books on FGM and developed a rite of passage for modern boys and girls in Kenya and Africa. These books are widely used in Kenya and elsewhere by persons of all churches and cultures. The project has given seminars, workshops and rites of passage throughout Kenya and even in Tanzania. We have developed charts, produced an informational DVD, and made pamphlets in many languages, teaching manuals and other tools. The project has entered a second phase, construction of the “Abundant Life Centre,” a place for training trainers and conducting research on FGM matters for the whole of Africa. We are in urgent need of donations for this dire need and silent “killer of joy” that African women have endured and will continue to endure unless we do something now.” 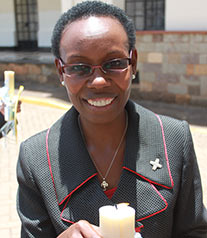 I’m the director of the Wanawake kwa Wanawake Centre in Kibera. This means I work with the women, children and families on a daily basis, as well as reporting back to those of our group in Australia. I’m a Loreto sister, anything I can do to assist as many as possible gain the advantage of at least some education is the passion that drives me. Education truly does change lives for the better, and providing this opportunity helps not only the child involved, but others in their network as well.  My dream is that the people here have access to the basic needs and the dignity that this brings. I want them to experience the joy of being alive, being able to smile at each new day and simply be happy.
I went to visit home of a refugee woman in Kibera who had three children; two sons, aged 12 and 19, and a daughter aged 16. The 19 year old unlocked the door and stepped outside to allow me in, as there was not enough room for a fifth person inside. There were only two beds, and on one lay the 12 year old, who suffered from autism.  On the stove was a cupful of porridge, cooling for the young boy’s sole meal of the day. The 19 year old would not eat, as there was only enough food for his younger brother.  I asked where everyone slept. The 19 year old told me, “Mum sleeps with my brother, and I with my 16 year old sister on that bed.” He then went onto say that he didn’t like the situation, but that this and crime was the only way he could earn enough money to get a larger house for his family. He explained that his criminal friends had better lives, although it virtually guarantees an early death – something that will weigh heavily on his mother who adores him.
Women For Women In Africa helped this young man, putting him into boarding school and funding his education.  This is a very poignant example of some of the painful realities that the Kiberan people face every day. Children are forced into crime and their helpless parents have no choice but to let it happen, simply because they have nothing better to offer.  I’m passionate about providing the opportunity of education to these children, giving them the chance of a life with a future; a life with hope. 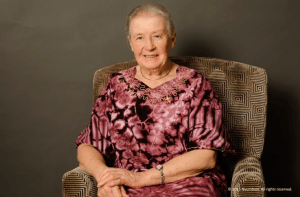 Sister Mary Owens has been the hands-on manager of the diverse Nyumbani programs for more than 20 years. When Nyumbani Founder Father Angelo D’Agostino died in 2006, Sister Mary stepped into the role leading Nyumbani’s efforts in Kenya. Many consider her an inspiration. Sister Mary is no figurehead leader. She knows the children by name and is deeply aware of the unique needs of children with HIV/AIDS. Metalsmithing vocational education Kenya Africa NyumbaniSister Mary is a skilled executive who advocates far and wide for funding and volunteer support. Her depth of experience, her winning way with the children and families, and her expert guidance have led Nyumbani to expand its breadth of services. She is especially proud of Nyumbani Village‘s growth as an environmentally sustainable, economically self-reliant community. Before Nyumbani, Sister Mary was a teacher, psychotherapist and religious leader. She holds a bachelor’s degree in education from University College, Dublin and a master’s in education and counseling from Trinity College, Dublin. She arrived in Kenya from Ireland in 1969. 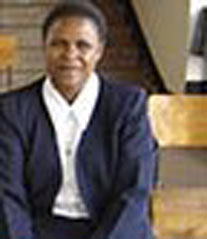 Sr.Clemeciah Nyakambi the director of Loreto Neema project. A project of the Loreto Sisters helping the less fortunate people who are living with HIV from the surrounding of Eastleigh. the project has helped so many for they are trained on how whey can make sweaters and clothes and then after somebody has gained the skills then they give them the capital they go and open their business and start supporting their family. Sr.Clemencial is a highly trained social worker with Masters degree from Kenyatta University and she has worked at the Neema project for more than 10years. The project has helped the less fortunate people in the society to experience the love God has for them for they are helped to live the way other people are living despite the difficult situation that they may have experinced before they become part of the Loreto Neema project